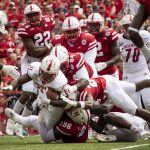 The subject at hand was the Blackshirts’ second half collapse they had against the Buffaloes on Saturday. After shutting out CU in the first half, Nebraska’s defense began to miss tackles and suffered breakdowns in coverage that allowed Colorado to get back in the game, and ultimately win it.

Chinander said that fatigue might’ve played a part in the breakdown, but that was far from the only reason.

Ultimately though, Chinander said that there’s no point in lingering on those mistakes.

“You can’t let a loss beat you twice,” Chinander said. “You’ve got to be able to watch the film, learn from the film on Sunday or Monday and then move on… I don’t really want to be talking about it today. I have to, unfortunately, but I want those guys focused on the next one. We have to move on.”

Nebraska will take on Northern Illinois this Saturday. Kick-off is at 7 p.m. but coverage will begin at 2 p.m. on KLIN.

In other news and notes from Tuesday’s practice: