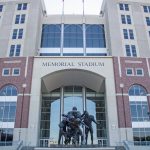 Nebraska football has won three Coaches Poll National Championships since 1979, with only two of those being claims with the AP. But How many could the Huskers have won if the current format, a four-team playoff, was in place?

ESPN looked at how the playoffs would have been set for each of the past 40 years, using the final AP poll of the regular season. With that benchmark, Nebraska would have qualified for 10 playoffs.

As LSU and Clemson make their final preparations for the College Football Playoff National Championship, we look at how things might have been for Big Red.

This is the first of a few Husker post-season matchups that actually happened. Nebraska lost to Clemson in the Orange Bowl 22-15 as the Tigers were named National Champions.

The Huskers won the Orange Bowl 21-20 over LSU that season. Unfortunately, Nebraska lost a controversial game to Penn State earlier in the year 27-24 at Beaver Stadium. Would a neutral site change the outcome? If so, that would set up a championship game against either Georgia, who lost to Penn State 27-23 in the Sugar Bowl, or SMU, who beat Pitt 7-3 for the Cotton Bowl.

This 1982 team featured All-Americans Dave Rimington, Mike Rozier, and Randy Theiss with a host of AA Honorable Mentions. Winning two neutral site games would seem not only possible, but probable with this team.

Here is the biggest “what if” of the entire exercise. What really happened in 1983? Nebraska lost the Orange Bowl 31-30 to Miami when Tom Osborne made the legendary decision to go for two and an outright National Title. Notice who isn’t in that four team playoff because they were No. 5 in the final AP poll? Miami.

For the semifinal, Nebraska and Illinois have a pair of common opponents. The Huskers beat Missouri 34-13 and Minnesota 84-13. The Illini beat Minnesota 50-23, but lost to Missouri 28-18. Illinois got walloped in the Rose Bowl 45-9 by UCLA.

An expected Nebraska win would set up a championship against Texas, who lost to Georgia 10-9 in the Cotton Bowl, or Auburn, who beat Michigan 9-7 in the Sugar Bowl. Luckily, these two teams played during the regular season, with the Tigers winning 20-7 at home.

That Auburn team featured Bo Jackson and had three top 10 wins in a span of three weeks. Did the Huskers have enough to stop him?

No matter the opponent, a wire to wire AP No. 1 ranking, led by Heisman winner Rozier, Dean Steinkuhler, Irving Fryar, Turner Gill, and Scott Raridon who were each All-Americans, would put the Huskers in the driver’s seat for another championship win.

Florida finished No. 3 but was ineligible for postseason play.

Nebraska had a pair of losses during the season, with one being 17-7 to rival Oklahoma, but the other being the inexplicable 17-9 loss at Syracuse who would finish with a 6-5 record. The Huskers did win the Sugar Bowl 28-10 over LSU.

The 1984 Cougars are the last team outside a power conference to win a national title. Their schedule has been criticized as weak, with only two opponents winning at least seven games. One of those two opponents wasn’t Michigan, who the Cougars beat 24-17 in the Holiday Bowl. The Huskers and Cougars do have a common opponent, Wyoming. BYU beat the Cowboys 41-38 while Nebraska won 42-7. A neutral site Nebraska win would make sense.

A championship game would likely be against Washington, as the Huskies beat the Sooners 28-17 in the Orange Bowl. With Oklahoma as the only common opponent and the results as they were, it would seem Washington would be favored in that title matchup, although Husker All-Americans Bret Clark, Harry Grimminger, Mark Traynowicz, Jeff Smith, and Mark Behning would have something to say about it.

Nebraska and West Virginia both went undefeated but stayed behind Florida State in the final AP poll of the regular season. The Huskers would fall to the Seminoles 18-16 in the Orange Bowl as Byron Bennett’s last second field goal sailed wide left.

Could Nebraska have won that game if it were played over the course of a playoff? Sure. The Huskers would be favored against the Mountaineers in the semifinal, while Notre Dame beat Florida State during the regular season in South Bend. Could the Irish do the same on a neutral field? If so, that would have set up a Nebraska and Notre Dame final.

Both teams played Florida State in the real 1993 season, but in a playoff between Nebraska and Notre Dame it would be hard to pick against Trev Alberts and fellow All-Americans Zach Wiegert and Calvin Jones.

Now for the first of three seasons that the Huskers added National Championships to the trophy case.

Nebraska beat Colorado 24-7 in Memorial Stadium when both were ranked in the top three. Could the Buffaloes avenge their only loss on a neutral field? Maybe, but I wouldn’t bet on it.

That would set up a final against either Penn State, who beat Oregon 38-20 in the Rose Bowl, or Miami who fell to the Huskers 24-17 in the Orange Bowl. The Nittany Lions and Hurricanes only have Temple as a common opponent that they both beat by more than three touchdowns. Odds give Penn State the edge to advance to the final.

Two undefeated teams with both having been selected National Champions by different organizations, though Nebraska got the two that matter with the Coaches and AP polls. How would this scenario finally play out? The Nittany Lions had five All-Americans, but the Huskers had both Brook Berringer and Tommie Frazier to run the offense along with eight All-Americans(Terry Connealy, Donata Jones, Brenden Stai, Ed Stewart, Wiegert, Rob Zatechka, Lawrence Phillips, Barron Miles).

Huskers win in 1994 with or without a playoff.

Another year where the Huskers could face a playoff opponent that they actually met. In 1995, Nebraska beat Florida 62-24 for the Fiesta Bowl and a consensus championship.

For the other semifinalists, Ohio State lost the Citrus Bowl 20-14 to Tennessee while Northwestern lost to USC 41-32 in the Rose Bowl.

Nobody was beating the 1995 Huskers.

The Huskers were 10-1 and top three going into the first Big 12 Conference Championship, but a 37-27 loss to Texas pushed the ranking back to No. 6. One of Nebraska’s losses was the Arizona State who would have been a two seed in that season’s playoff.

Perhaps the season that most needed a playoff. With the Huskers in the Big Ten, Nebraska and Michigan fans get to talk more about 1997 where the Wolverines took the AP top spot while the Huskers were tops in the Coaches. A playoff would have given us a clear answer.

In the semifinals, we have an easy pick after Nebraska beat Tennessee 42-17 in the Orange Bowl. On the other side, Michigan beat Washington State 21-16 for the Rose Bowl while Florida State beat Ohio State 31-14 for the Sugar Bowl. That Ohio State team becomes an only common opponent, with the Seminoles have a larger margin of victory on a neutral field compared to the Michigan win at home. There is a chance that the Wolverines would not have even made the final with a playoff.

Florida State looked strong down the stretch, only losing at rival Florida by three, while Michigan was unblemished. The Wolverines did beat Colorado at home 27-3, a common opponent for the Huskers who won by a closer margin of 27-24 but in Boulder.

The 1997 season ended in a split, but this had all the makings of one of the best championship games that we missed out on.

This was the first season of the Bowl Championship Series(BCS), pitting the top two teams, based on an average of pools and computer rankings, into a championship game.

With Eric Crouch running the offense and Nebraska fresh off their first, and would be only, Big 12 Conference Championship, the Huskers beat Tennessee 31-21 in the Fiesta Bowl. Getting past Virginia Tech then upsetting Florida State would have been a tough road for Big Red. The Seminoles dominated the BCS Championship 46-29 over the Hokies.

Despite not making the Big 12 Championship after a 62-36 loss, the Huskers made the BCS Championship where they lost 37-14 to Miami. That tells us how the semifinal would have likely gone against one of the best teams with the most future professionals in college football history.

Nebraska went this twelve year stretch going into bowl season unranked six times and ranked six times, but none of the seasons had the Huskers close to making a playoff. The closest was 2010 when Nebraska was No. 18 after losing 23-20 to Oklahoma in the Big 12 Championship.

From the final season to Bo Pelini, through three seasons of Mike Riley, and finally to the first two seasons of the Scott Frost era, the Huskers have not really sniffed the College Football Playoff.

But would Nebraska have more Championships?

Now for the hard part. Nebraska would have played in 10 playoffs since 1979.

We can immediately eliminate 1981 and 2001 as possibilities since Nebraska met, and lost to, their opponents in those postseasons. For the other eight, we have to take some guesses.

The Huskers get two no-doubters in 1994 and 1995. The other claimed National Championship in 1997 would be too close to call with Florida State and Michigan.

Nebraska would have a strong chance in 1982 and 1983, with a solid possibility in 1984 as well. That would make two to three championships in the 80s that never came to be.

For the final remaining possibilities in the 1990s, Nebraska would have a chance in 1993 against Notre Dame who beat Florida State during the season, while in 1999 the Huskers would have been hard pressed against Michael Vick in the semifinals before a possible championship against a Florida State team that was ranked No. 1 from beginning to end.

The Huskers won three National Championships over this time frame, but with a College Football Playoff, there looks to have been a real chance at winning between four and seven instead. As LSU and Clemson leave us no doubt about who the champion is tonight, the “what ifs” remain on how different college football, and the Husker trophy case, could have looked over the past 40 years.