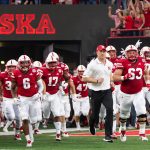 The first Wednesday of February used to be a lot more stressful for coaches around the country. But since 2017, programs have adjusted to the Early Signing Period in December.

“Honestly, this Early Signing Day has changed a lot,” said Nebraska coach Scott Frost on the Rivals National Signing Day show. “It’s pretty relaxing now in February. The majority of our work was done in the Early Signing Period.”

The majority of work was done for most schools in the Early Signing Period, with 76.8-percent of the 2020 class signed in December. Even so, the Huskers have two scholarship spots open to use.

The top target for the day was Tanoa Togiai, a three-star defensive end out of Rigby, Idaho. Togiai selected Utah late this afternoon.

Nebraska currently sits at the 85 scholarship limit for the fall, so if anyone else were to sign then attrition would be needed to get back to that number.

Right away this morning the Huskers did add a trio of walk-ons to the class. The three additions are kicker/punter Tyler Crawford out of Broken Arrow, Oklahoma; running back Beau Psencik from Houston, Texas; and Isaiah Harris out of Millard North.

Back in December, Nebraska signed 23 scholarship players, including seven out of Florida.

“We’re gonna have to go all over the country and try to find the right guys, the guys that fit us, high character kids that are great athletes,” said Frost. “I think our coaching staff has a lot of credibility built up down there (in Florida) with coaches and kids because of what we were able to do in Orlando (at UCF). Several guys on our staff did a great job recruiting down there, especially (Defensive Backs Coach) Travis Fischer.”

Another of the December additions was top in-state player, four-star wide receiver Zavier Betts of Bellevue West. Originally, Betts had planned to sign in February but ended up signing on the Friday of the Early Signing Period.

“I think one of the big things we were missing last year were playmakers on the perimeter. With our offense, that’s a necessity to make it go the way that we want it to,” said Frost. “It’s great when, in our opinion one of the best guys that I saw all year at that position was right down the road from us.”

“Zavier’s got a bit of work to do to make sure he gets everything finished in high school academically,” continued Frost. “We’re really excited about him. He gives us a big presence on the outside. He’s really gifted and I can’t wait to get him in the program.”

The 2020 class has the most four-star signees for Nebraska since joining the Big Ten.