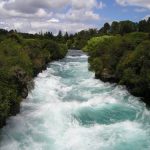 OMAHA, Neb. (AP) –
The National Weather Service says there’s an elevated flood risk along the eastern Missouri River basin this spring. That’s because the soil remains wet and significant snow is on the ground in North Dakota and South Dakota. Communities along the lower Missouri River already were bracing for the prospect of more flooding this spring because many of their levees remain in poor shape after last year’s massive flooding. Nearly everywhere that flooded last year in Nebraska, Iowa, Kansas and Missouri is at some risk to flood again because of the extensive damage to levees.