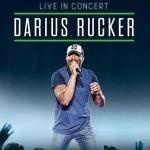 Darius Rucker first attained multi-Platinum status in the music industry as the lead singer and rhythm guitarist of GRAMMY Award-winning band Hootie & the Blowfish. Since releasing his first Country album in 2008, he has celebrated four No. 1 albums on the Billboard Country chart and nine No. 1 singles at Country radio, earning a whole new legion of fans. In 2014, Rucker won his third career GRAMMY Award for Best Solo Country Performance with his 4x Platinum-selling cover of Old Crow Medicine Show’s “Wagon Wheel.” As a lifelong philanthropist, Rucker is a continuous supporter of the MUSC Children’s Hospital in his hometown of Charleston, South Carolina, and has raised millions of dollars for St. Jude Children’s Research Hospital through his annual Darius & Friends benefit concert and golf tournament, as well as for more than 200 charitable causes supporting public education and junior golf programs in South Carolina through the Hootie & the Blowfish Foundation. Currently, Rucker is on the road with his Hootie & the Blowfish bandmates for the Group Therapy Tour as they celebrate the 25th Anniversary of mega-hit Cracked Rear View as well as the forthcoming release of Imperfect Circle, their first album in nearly 15 years, set for release November 1 with Universal Music Group Nashville. For more information, visit www.dariusrucker.com and follow on social media @DariusRucker.