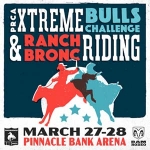 The PRCA will bring some of the best bull riders in the sport plus top – notch ranch bronc riders as they go head to head with some of the toughest stock on the circuit. Each performance matches the sport’s toughest athletes against the award-winning stock of Mosbrucker Rodeos on the roughest playing field in America. Each night fans will be at the edge of their seats as they watch amazing bull riders and ranch bronc riders perform in the most intense, bone-jarring 2 hours in sports . . . 8 seconds at a time.