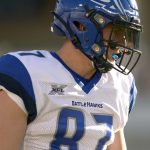 The rebirth of a league can be a new opportunity for careers.

For a Lincoln Southwest grad and former Husker, it feels like a dream.

“My junior year of high school, if you would say I’d still be playing football at the age of 26, getting paid to do it, I probably would tell you you’re crazy,” said Brandon Reilly over the phone after practice Thursday. “Every opportunity I get, I’m excited for, and just try to make the most of everything.”

After a career at Nebraska that included walking-on, earning a scholarship as a sophomore, then finishing in the top-20 for receptions in school history, Reilly tried his hand at the NFL.

First, Reilly signed as an undrafted free agent with Buffalo in 2017 before getting waived and signing onto the practice squad. He moved up to the 53-man roster for the final five games. The next year, he broke his ribs in the first preseason game.

Reilly would also gave it a go with the Lions and Cowboys practice squads, and finally spent the 2019 training camp with the Steelers before getting released.

“Now I’m in St. Louis and ready to make a name for myself here,” said Reilly.

“I love (having De’Mornay as a teammate),” said Reilly. “Always good to have a familiar face. We’re always about making one another better and ultimately bringing a championship for the XFL back to St. Louis.”

Hoping to stand in the way of Reilly and Pierseon-El are three other former Huskers.

Jerald Foster was taken in the fifth phase by the Vipers. Also taken by the Vipers was Alonzo Moore in the tenth round of the first phase at 76th overall. Moore is currently with the Dragons.

The final Husker making an XFL roster is cornerback Mohamed Seisay, who was taken in the ninth round of the fourth phase by the Dragons.

The XFL, besides playing in the spring as opposed to the fall, is differentiating itself from the NFL with a few new rules. Reilly says his favorite is increased on-field communication.

“Having a speaker in our helmet,” said Reilly. “The offensive coordinator can rattle the play off quick and we can line up quick and play fast. I think that’s definitely an advantage for the offense, and it’s something I’m looking forward to.”

Other rule differences include teams unable to move on kickoffs until the ball is caught, point after touchdowns being worth one, two, or three points with no kicking allowed, and overtimes looking more like a hockey shootout than anything the NCAA or NFL are currently doing.

All five Huskers are listed on the team depth chart’s and should see playing time this weekend. That’s a big deal since being active on game days brings a bonus, as does being on the winning team each week.

Below are the players by position and depth chart:

With five Huskers in the XFL, one player is already making sure his team has a claim on Lincoln fans.

“If (the fans) go somewhere else, I’m gonna have to have some choice words with them,” joked Reilly. “Definitely having me and De’Mornay here, it’s an easy drive or they have direct flights from Omaha. I know I have a lot of family and friends planning to flight out, drive out to all the home games.

“I’m looking forward to have the support from back home.”

XFL games will be televised, with 24 on ABC or Fox and the remainder on ESPN, ESPN2, FS1, and FS2.

Feature photo provided by the XFL.