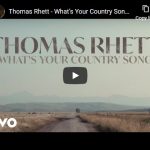 On Wednesday, Thomas Rhett released the lead-up to his next album “What’s Your Country Song”. Helping him write the song was his dad Rhett Akins, Jesse Frasure, Ashley Gorley, and Parker Welling.

The song has references to a number of country songs including Garth Brooks “Friends In Low Places”, Alan Jackson “Chattahoochee”, Merla Haggard’s “Mama Tried”, and so many more.