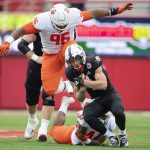 “It was not a good performance from anybody.”

“I didn’t really see this coming,” Frost said after the game. “I was embarrassed by our level of execution in all three phases.”

The lack of execution began on the first play from scrimmage for the Huskers. Luke McCaffrey, who got the nod to start at quarterback for the second consecutive game, scrambled to his left and threw a low, incomplete pass that was picked up by Illinois. The officials ruled it to be a lateral and and turnover.

Referee John O’Neill told the Associated Press’s Eric Olson what happened on the play from an officiating perspective.

“The covering official ruled it a backward pass,” O’Neill said. “The play was reviewable, but we didn’t have a camera with a shot right down the line of scrimmage. The replay official let it stand because there would have been no indisputable evidence.”

A replay from the FOX College Football Twitter account, shown below, would seem to contradict the idea of no camera angle to review the play.

Not the start Nebraska was hoping for 😬@IlliniFootball comes up with a big turnover seconds into the game pic.twitter.com/pIWxkMif6W

“I thought it was a pass, but I can’t make a critical error like that,” McCaffrey said of the play. “If something’s there I probably should have just ran that and got what I could. I got stuck trying to make a play and you can’t try and make plays. You just have to do your job.”

After a penalty on Nebraska to start the Illinois drive, the Illini easily covered the 16 yards for the first score of the game.

The Huskers answered with a 12 play, 75 yard drive that included McCaffrey completing all three of his pass attempts for 22 yards while adding 29 rushing yards and a touchdown. Marvin Scott III got the start at running back and ran four times on the drive for 20 yards.

Illinois then converted two third downs while marching 75 yards to retake the lead at 14-7 with 5:33 to go in the first quarter. The Huskers never threatened from there.

The lack of hats to the ball on defense allowed Illinois to rack up 490 yards of offense and convert 11 of 17 third downs. The mistakes on offense were magnified by three McCaffrey interceptions to go with his first play fumble and a fumble lost by Wan’Dale Robinson. And special teams had multiple penalties and gave up a fourth down conversation that the Illinois punter easily converted with a 14 yard run on the first drive of the third quarter.

That fourth down conversion ruined a three-and-out that the Blackshirts desperately need, trailing 28-10 at the break. Instead, Illinois ran off 6:31 of clock and added three more points.

Nebraska, meanwhile, had six total second half points through the first three games. That was eclipsed on the next Husker drive as McCaffrey added his second rushing touchdown of the game to close the gap to 31-17.

But Illinois would tack on another touchdown and a field goal to make the lead insurmountable for an inconsistent Husker offense. Adrian Martinez entered the game for the final drive, completing three passes for 43 yards and a touchdown while also running for 13 yards. A two-point conversion was converted, but offensive pass interference was called on Nebraska. The next attempt failed, as did the onside kick.

Illinois ran out the clock for the 41-23 victory.

This is only the second victory for Illinois over Nebraska since the Huskers joined the Big Ten, and the first win for Illinois in Lincoln since 1924.

Nebraska hasn’t won back to back conference games since 2018.

“We’ve got plenty of talent right now to compete in every game,” Frost said. “But in order to win the games, you’ve got to do a lot more right than we did today.”

Energy, enthusiasm, and execution continue to be pointed to as lacking for the Huskers, now in year three of the Frost Era. That wasn’t the case when the head coach was just No. 7 for the Huskers, when Big Red lost just two games and won the 1997 national championship.

“We got beat physically today. We turned the ball over, and we certainly didn’t win on special teams. We’ll keep preaching that until the kids understand it and we get it done.”

McCaffrey finished the game throwing 15-for-26 for 134 yards while adding team-highs with 26 rushing attempts and 122 yards.

Wan’Dale Robinson led the receivers with 60 yards. He also had seven carries for 60 yards.

Bigger than the game, senior linebacker and captain Collin Miller left on a stretcher in the second half after making a tackle. Frost said the initial prognosis is positive.

“He’s been the heart and soul of our football team,” Frost said. “Right now, cautiously optimistic that everything looks good. From what I hear, he’s got feeling everywhere, full range of motion, movement and the preliminary examination looks pretty good.

“Our prayers are with him.”

Nebraska goes on the road next for the annual Black Friday game with Iowa (3-2). Kickoff for that game is set for noon.