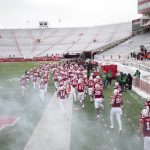 A trio of additions to the Nebraska football staff were announced Monday.

Head Coach Scott Frost announced that Marcus Castro-Walker has been hired as the Director of Player Development, Bill Busch joins the Huskers as a Defensive Analyst, and Keanon Lowe will serve as an Offensive Analyst.

All three have ties to either Frost or Nebraska.

“The three men we have added to our staff will all impact our program in a positive way,” Frost said. “Marcus Castro-Walker has a natural ability to connect with young student-athletes, help them in their transition to college and maximize their full experience as a college football player. He will be a great supplement to many of the off-field programs our staff already has in place for our players.

Castro-Walker worked with Frost at UCF. In his role at Nebraska, Castro-Walker will work closely with Frost to manage and oversee many off-field responsibilities for Husker football student-athletes.

Busch has more than 20 seasons of Power Five coaching experience, including two previous four-year stints at Nebraska (1990-93, 2004-07). He has spent the last three seasons as the safeties coach at LSU.

Lowe was an analyst at UCLA last season for Chip Kelly, previously serving under Kelly with the San Francisco 49ers and Philadelphia Eagles. Before that, Lowe was a standout receiver at Oregon. During his four year’s in Eugene, Lowe had Frost and current Nebraska offensive coordinator Matt Lubick as his position coach.