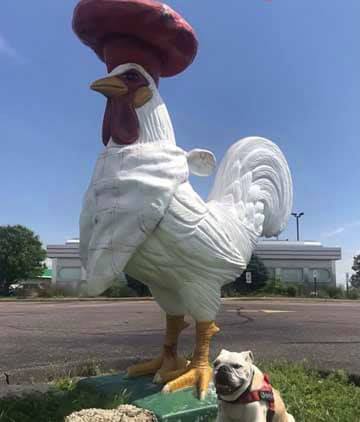 Remember, Big Boy restaurants? They had a huge boy holding a hamburger out front. Every so often, someone would steal the statue and it would make the news.

You don’t hear about that happening much anymore…until now…except it isn’t Bog Boy…but it’s a 12 foot tall rooster in Osseo, Wisconsin.

Now with a mascot that tall, it makes you wonder how it could go missing, but how could the owner not know it was gone. Well, that was the situation at the Osseo Family Restaurant when a customer came in and asked if the owner had gotten ridden of the massive bird after it being a local landmark for the past 30 years.

To the owner’s surprise, it was in fact gone.

What’s crazy about it is that the giantic fowl is made of metal and bolted to a concrete block…so you know this took some effort to nab. Regardless, there is a $1,000 reward for it’s safe return

Because this is small town America and in the Mid-West, our kindness showed through. According the the owner, Artan Shabani:

“If it’s a prank, if it’s some high school kids or college kids, I’m not pressing charges…I get it, they’re young, they’re having fun,..They didn’t harm anybody, they didn’t damage the property or the business or anything. Of course, I’m not going to press charges …I’ll still even give them the $1,000 reward for bringing it back, too, and give them a free meal at the restaurant.”

However, if the bird was stolen to be sold, that is a different story.

At this point, there are no leads. But until there are answers, Shabani had said he will order a new one, since people stop by to take pictures with it.